By Robert December 12, 2011 Pests and Diseases No Comments
0 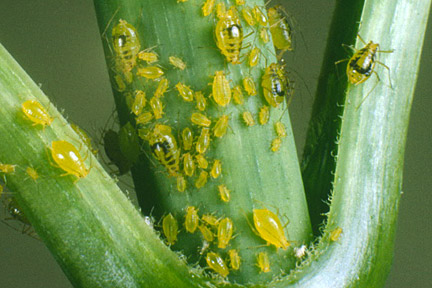 How come you never see one or two aphids, but instead they suddenly appear in swarm numbers? Well, it’s because aphids pretty much have only one form of defense, and that is to reproduce as fast as possible.  And by fast, I mean turbo-charged. Aphids have done away with the time consuming details like courtship and sex. Instead, female aphids give birth to genetically identical copies of themselves – clones. The young (called nymphs) are born ready-to-go, rather than hatching from eggs.  An adult female can give birth to up to 12 nymphs a day. As if that wasn’t daunting enough, the young nymphs are born with nymphs of their own already developed inside them. And those nymphs have nymphs of their own developing. I have seen a photo of an aphid giving birth to an aphid giving birth to an aphid. So you can see how, very quickly, aphid numbers can explode. For the aphid, it is a race against time, because very soon, a host of predators will be hunting them down. Other than simply reproducing faster than being eaten, aphids have another trick. Some species of ants ‘farm’ them, protecting the aphids in return for honeydew, the sweet, sticky substance that aphids excrete.

In Autumn, aphids revert to the more traditional form of romance.  Female aphids start giving birth to both male and female aphids, and these mate. Eggs are laid, and in spring, these hatch (all female offspring) and the cycle starts again. The signal for the Autumn change can be temperature, light or changes in the quality of the food source. In warm areas, such as greenhouses, asexual reproduction can go on for years.

So what threat do aphids pose to plants? Aphids are sap-suckers, damaging the tender new buds and leaves by piercing and extracting the sap. This can lead to disfigurement of the plant, loss of vigour, and potentially death is serious infestations. More importantly though, is that aphids act as a vector for viral and fungal disease. Sooty mould is a common sign of aphid damage, and a viral or fungal pathogen can be spread quickly through adjacent plants. Some species of aphids are winged , where as other simply catch a lift on a breeze.

Now, how to control them. Aphids are easily controlled with normal contact pesticides. However, the same pesticides also kill their predators, and many other benign bugs, so where possible, avoiding pesticides is preferable. Vigilance is the best form of control. If populations are allowed to swarm (and given the speed of reproduction, that can happen in a few days), then controlling them becomes more difficult without resorting to chemicals. So it is best to act as soon as you see the first aphids appear. They can of course be simply wiped off a plant. There is also an old-fashioned method that works effectively – soapy water. As a kid my Mum (yes, in those days, Mum always cooked dinner and did the dishes) always kept the washing up water to throw over the roses. Whilst I can’t vouch for how effective it was, I’ve ready plenty since to suggest that it is a great way to keep aphids at bay. The dilution has to be very low , 1 or 2%, and and it is good to test the solution on an out-of-the way part of the plant first, as soap can burn plants. Also, just because it is soap, don’t assume it is kinder to the environment than other pesticides. Soap kills aphids, but it will also kill the beneficial bugs that prey on them.