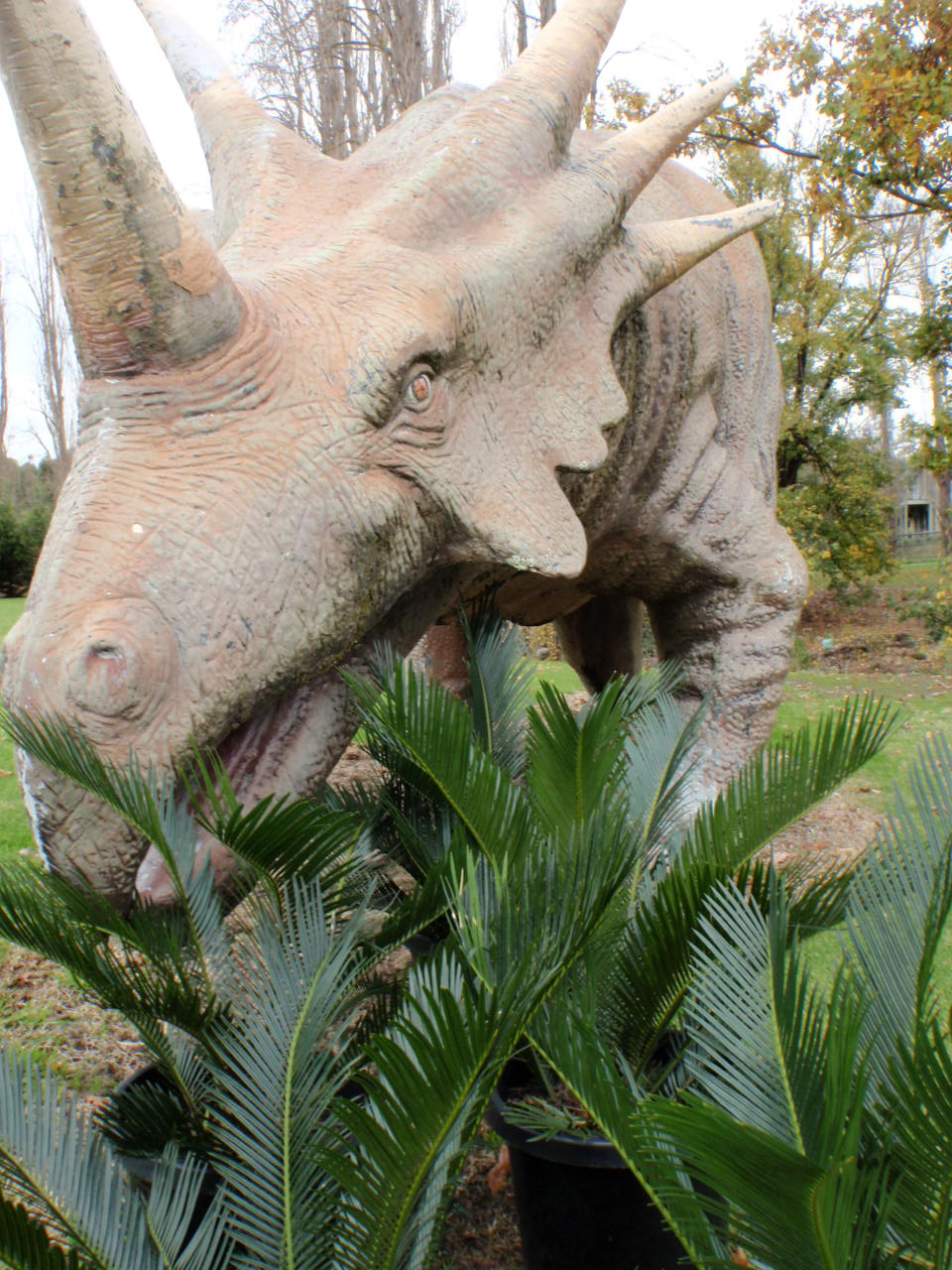 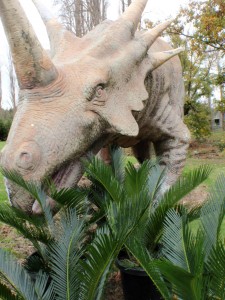 Visitors to Kilby will know we have our resident dinosaur, a Triceratops from the Late Cretaceous Period. Well, we now have another resident whose ancestors developed in an even more  distant times – Cycas revoluta.

The Cycad family are a fascinating group, who have been around in one form or another since  the Late Permian period 280 million years ago. Although Cycas revoluta is sometimes referred to as a ‘living fossil’, this is not strictly true. It is now believed that most modern forms of cycads have evolved in the last 12 million years or so, though they have not changed much in form since the first cycads appeared. There are two species of cycad in the family Bowenia that do appear to have survived unchanged since the Cretaceous period. Both of these live in Queensland.

Cycads are sometimes referred to as palms, though they are only distantly related. They arrangement of frond-like leaves on a single trunk is palm like.  The stiff, spiny leaves developed to make the plant less palatable to browsing by dinosaurs. There appear to have been many more types of cycads previously which have now become extinct. Possibly the cycads that are still around today are those that managed to evolve strong defensive mechanisms, such as the tough leaves, to survive the onslaught of hungry dinosaur herds.

In many ways they are still very simple trees. Cycads are either male or female, and pollination is carried out by wind or by insects. Both plants develop cone-like structures, the male ones looking a bit like a corn cob, the female are rounder.

Cycas revoluta is the most widely planted of the cycad family, and it is well suited to garden use. Originating in the Southern parts of Japan, it is tolerant of quite low temperatures (down to -10c), though very cold weather will cause it to lose its leaves. In Melbourne it doesn’t get cold enough to be troubled by leaf loss. Cycads love warmth, and thrive in sunny spots in the garden. Good drainage, and the application of mulch will keep them looking green and happy. Once established they can cope with drought, though they do better with good watering over the summer months.

Cycads are slow growing, and can grow to very old age. 1000 year old examples are known. Over time a trunk will develop, and often additional rosettes of leaves develop at the base of the trunk. These too will grow, and eventually you’ll have an amazing, multi-trunked cycad.

A couple of things to bear in mind when planted your cycads. The leaves near the base of the frond can become very stiff and sharp, so give thought to the effect on ankles of people when planting near paths. Also, although the leaves are tough and leathery, they can get frayed and untidy looking if continuously brushed against.