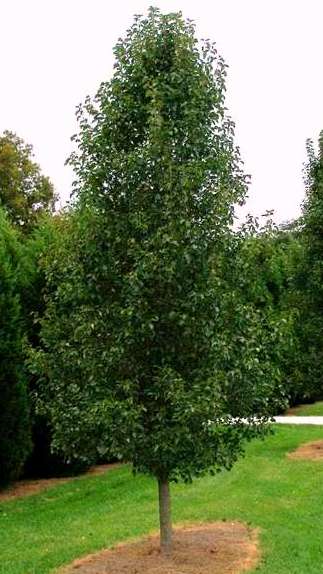 Tough, adaptable and beautiful, Pyrus calleryana is a very popular choice for all sorts of different gardens. But what makes it such a good choice?

Well,  knowing where it comes from is the key. Although popular and widely planted in the US, Pyrus calleryana is actually a native of Southwest China and Northern Vietnam. It has a fairly limited range in these areas, and there is a lot of genetic diversity amongst the different populations, reflecting the different environmental conditions. How does that help it thrive in Melbourne?

The climate in Southwest China can be extreme. Long, hot, dry summers and short, cold winters. Sound familiar? Pyrus calleryana copes well with Melbourne conditions because it has evolved and adapted to similar conditions in its homeland. In fact, our winters are shorter and milder, which is why the tree is out of leaf for such a short time.

This toughness, ability to withstand dry heat, and hard winters lead to it being widely planted in the Eastern states of the US. An improved, more upright form was developed, called the ‘Bradford’, and to this day this name is used as a generic name for the species. However, the upright habit of  Bradford caused a problem with shedding limbs. Given the widespread use of it in street plantings, and the litigous nature of Americans, there was a need to develop a more  robust, yet still upright form. ‘Cleveland Select’, or ‘Chanticleer’, was the result of the programme to breed a better pear. It is now the leading form for use in gardens and street plantings, with a great combination of elegant, upright form and structural robustness.

An even more upright form is ‘Capital’. This lovely cultivar has a less even growth habit than ‘Chanticleer’, but it forms, in maturity, a narrow, upright tree of great beauty. A great choice when space is at a premium, it allows you to get the benefit of a tall, deciduous tree without the need to prune it back hard in a tight space. Popular for pleaching and hedging, it shares all the characteristics of ‘Chanticleer’ in terms of stunning spring flowering, deep, shiny leaves and outstanding Autumn colour.